I am meeting with Mike Lizarraga tonight for my first interview for this blog!  The reason he is my first is actually a great story, so I wanted to share that with you beforehand.

I have taught college English for 20 years. But like everyone else, there is always that first semester. In fact, I just spoke with my niece Josie the other day as she is finishing her first year as a teacher (she teaches fourth grade, something I think only saints or crazy people can do!).

Talking to her reminded me of my first class.

The first day of a teacher comes with the mixture of absolute fear and the excitement of a kid buying supplies for the first day of school. Teaching is my second (or third, but who’s counting?) career. So I have had first days at plenty of jobs. And yes, there is always a mix of fear and excitement on any first day.

But teaching is a bit different. When teaching, you are a performer, putting on a show. And when it is your first time, you do so without the benefit of a dress rehearsal. Actually hardly any rehearsal.

Josie had the benefit of student teaching, and she occasionally subbed, one time for a month. But what she quickly found out is that nothing can prepare you for the one-woman (or man) show that is your own classroom.

And because of the nature of the educational institution, for the most part, you are not supervised. Yes, occasionally an administrator will wander into your room. But other than that, the only feedback comes from the students, whose favorite teachers are often the ones who expect very little from them.

The most difficult part of that first year is learning that the reality is much different from what was imagined. Inevitably, things do not go as planned. Many assume they will change the world, that they will have control over their classrooms like no other teacher ever has, that the students will love them unconditionally and willfully do all of the work assigned. Those teachers are quickly disillusioned. Luckily I was not one of those.

For Josie, her disillusionment came in the form of parent and student behavior. Parents have harassed her, students’ language has shocked her, and the drama has distracted from her goals for them.

But for me, my biggest concern was my insecurity. I worried that I did not know enough: that students would ask questions I did not know the answers to and, as a result, they would lose complete respect for me; that I would run out of things to talk about, and we would all simply stare at each other as the clock ticked off the remaining minutes of the class. 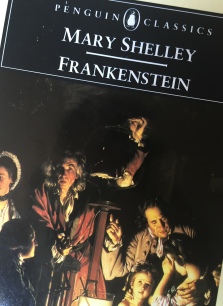 My very first class was freshman composition. I had chosen Mary Shelley’s Frankenstein as the first novel to tackle. I look back at that now and wonder what the hell I was thinking. That is NOT an easy book to teach.

Classes were 50 minutes at that time. I did tremendous amounts of research and took copious notes of my own as well as from a multitude of critics. I outlined my lecture on four type-written pages. And when class started, I placed my notes on the lectern so as to guarantee not a moment of silence. I only knew what was written on the pages. I could not go off-script, or I would be lost in my ignorance. This also meant that no one else could speak, let alone ask any questions.

The good news was that I only covered less than half of the first page of my notes that day. Apparently I had enough notes to get me through half a semester.

Back to Mike. About ten years after that, as well as after a marriage, two children, and a divorce (that was a busy ten years!), a young man stopped me on campus and called me by my maiden name. He said I had taught him his freshman year, and that he loved the class. He looked familiar, but I could not remember when I taught him. He reminded me by telling me that the class had read Frankenstein.

Oh my goodness. I never tackled that novel with a freshman class again. So that meant he must have been in my very first class! At the time, I never would have revealed that I had never taught before, but enough time had gone by that I was willing to confess my inexperience. Luckily, he was shocked to hear that.

At the time we reconnected, I was busy writing nonfiction articles and having some success getting published in magazines, newspapers, and websites. Mike was also pursuing writing and wanted to start submitting some of his own stories. His favorite genre? Horror (the irony of Frankenstein not escaping me!).

So we met for coffee a couple of times to talk about our writing and our success stories with publishing. However, life got in the way, as it is wont to do, and we stopped meeting but stayed in touch via Facebook and email. I watched as he had more and more success with his writing. What a gift to be able to watch his journey.

Recently, Mike posted pictures on Facebook of the first time one of his stories was put to film: “The Shell.”

That is the result that no teacher can see on his or her first day of class, or even his or her first year of teaching. That is what Josie cannot yet see. But the truth is that most often we never see the rest of the story. We invest ourselves in our students, we pour ourselves into them, for a brief moment in time. We hope we have an impact. We hope that we make a connection.

It isn’t even so much that I need any student to remember me specifically. My only goal is truly to make writing (and reading) a positive experience. For too many, it is miserable, and they carry this bias against reading and writing around with them for the rest of their lives. If I can help them stay open to the gifts that both can bring, I have done my job.

I knew Mike had to be my first interview. I am so excited to talk to him about his writing, his journey with “The Shell,” and his plans for the future. So now I am off to go write a list of questions.

And if anyone has any questions to ask him about his first film, let me know!